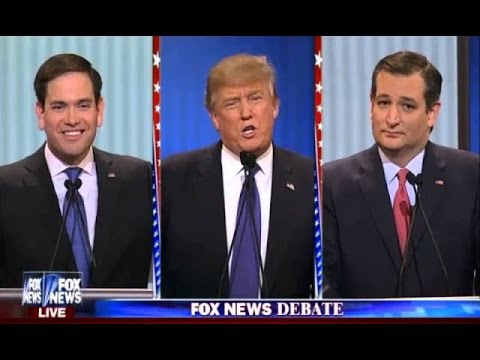 In a year of crazy debates, last night’s Fox News debates was a doozy. Trump trumpeted about his penis size, and current GOP sad sack Ted Cruz ate something gross. I was unable to find definitive photographic evidence on Trump’s “inheritance,” so we’ll have to trust him on that one.

A relatively new lie that Donald Trump has been spouting is that relatives of the 9/11 hijackers left the US two days before that attacks. “They knew what was happening. The wife knew exactly what was happening.” Trump stated last night at the debate.”They left two days early … and they watched their husband on television flying into the World Trade Center, flying into the Pentagon.” He made similar claim on CBS’ Face The Nation in December when he said the hijackers “put their families on airplanes a couple of days before, sent them back to Saudi Arabia, for the most part.”

Overlooking the confusing language Trump used about the number of wives involved, according the 9/11 Commission Report virtually all of the 9/11 hijackers were unmarried and none of them brought wives or girlfriends to the US. Ziad Jarrah, a Lebanese hijacker, apparently had a girlfriend that lived in Germany and visited him in the US in early 2001, but left in July.

To give Trump some benefit of the doubt, he may be confusing the facts about family members of terrorists leaving the US in the wake of 9/11. To say that he confused the facts one would also have to assume that Donald Trump has any shred of respect for facts. In any case, relatives of Osama Bin Laden that were living the is US at the time of the attacks were released from the country nine days after 9/11. The Saudi government petitioned for their release, fearing reprisals once Bin Laden became the prime suspect. The Bush administration granted these requests and later came under fire for the decision.