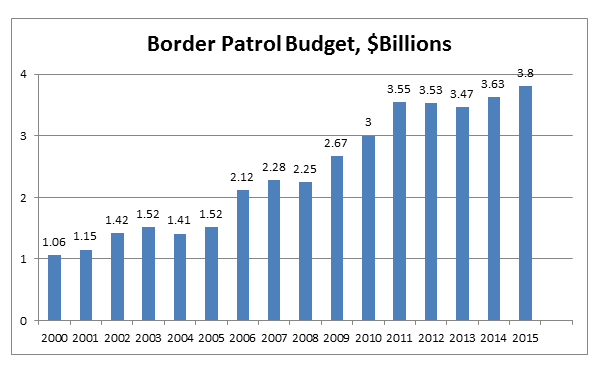 In an eye opening article by the ACLU yesterday, they outlined four ways that the recent endorsement of Trump by the National Border Patrol Council is filled with inaccuracies and outright xenophobic fear mongering. To sum it up in a short blog post:

The NBPC stated that they “serve this country in an environment where our own political leaders try to keep us from doing our jobs.” Taking a quick look at the above graph, that wouldn’t seem to be the case. The budget for the border patrol has more than tripled since 2000, from $1.06 billion in 2000 to $3.8 billion in 2015. Despite the rhetoric of the Trump campaign, the rate of these increases has gone up in the last 8 years under the Obama administration. They are not wanting for resources, and the Border Patrol remains an outfit with very little oversight.

The ACLU’s second point was “if we do not secure our borders, American communities will continue to suffer at the hands of gangs, cartels and violent criminals preying on the innocent. The lives and security of the American people are at stake.” Despite the obvious fear mongering, it turns out the border communities have lower crime rates. According to the Wall Street Journal, “newcomers to the U.S. are less likely than the native population to commit violent crimes or be incarcerated.”

“America has already tried a young, articulate freshman senator … under whose watch criminal cartels have been given the freest border reign ever known.” Actually that “freshman senator” has the nickname in some circles as the “Deporter in Chief,” the Obama administration having deported more undocumented immigrants than any administration in history.

“There is no greater physical or economic threat to Americans than our open border.” Unless you count almost anything else…a trade war with China, declining US jobs, ISIS, unrest at home and abroad, inequality of wealth…the list goes on. This is an extremely bold claim by the NBPC, but they don’t back it up with any facts.

Obama has deported more immigrants than any other president. Now he’s running up the score.