Donald Trump doesn’t care about making enemies. He has insulted almost everyone in the media and political sphere in the last year, perhaps no one more than “Lightweight” Marco Rubio. He called him a scammer, a loser, a choker, Mr. Meltdown, a mess, desperate and a joke. Trump likes to coin puerile pet names for his opponents and “Lightweight” was the one that Trump settled on for Rubio. Here are a few choice name calling tweets collected by CBS News: 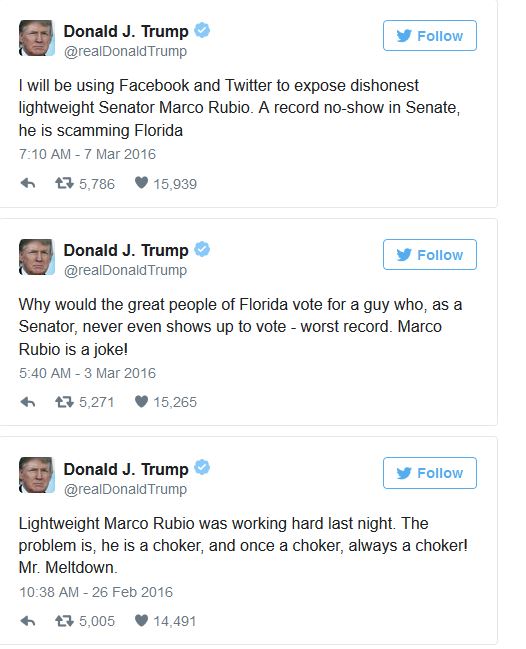 But what is this on Twitter yesterday? Is Trump actually encouraging Mr. Meltdown to again run for Senate?

Despite calling him a loser and a scammer, Trump wants him to run because he is polling well. That is perhaps the scariest of all, as it means that Donald Trump is becoming a more sophisticated politician. Not only is he looking a polling data, which he rarely did  in the primaries, but he is looking ahead to a Senate that very well could lose the Republican majority in November. Rubio has also been reluctant to speak on Trump’s behalf at the Republican National Convention, not to mention release his delegates to vote for Trump.