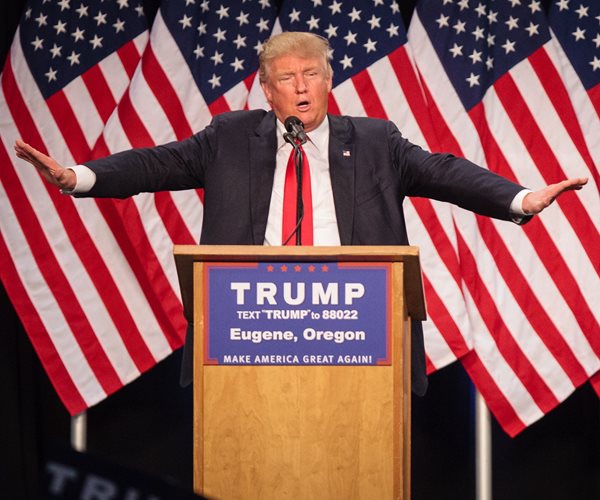 Donald Trump has been on the fundraising circuit this week, holding events in Texas in Nevada. He claimed to raise $12-13 million “between yesterday and today,” though sources in his own campaign put that number closer to $8 million. Not bad for a candidate that is still perpetuating the notion that he is self-funding a general election campaign. As WDTLAY as previously covered, Donald Trump has never fully self-funded his campaign, as he claimed throughout the primaries.

According to Open Secrets, Donald Trump really has funded about 75% of his campaign himself, a whopping $43 million so far. That leaves nearly $14 million in donations. These numbers are current as of May 23 and do not include the last few weeks of fundraising.

Yesterday the Trump campaign sent out an “emergency” fund raising email to combat the airing of ads by “Crooked Hillary,” the first such email of his campaign. This signals a move towards a more traditional fundraising effort, but Trump couldn’t help but pat himself on the back and take a shot at the GOP.

“Life is like two way street, right? Otherwise I’ll just keep doing what I’m doing,” Trump threatened.  “I’ll just keep funding my own campaign. I’m OK with that. That’s the easy way. I mean for me, that’s the easy way. But, hopefully I can continue to go the way we’re going, and this weekend we raised a lot of money. We’ve raised a lot of money for the Republican Party. We’ll keep doing it, because we do have tremendous support within the party that I can tell you.”

Trump did not seem too concerned with the current hand wringing and waffling in the GOP, saying “If the Republican party acts like they don’t wanna help, I’ll fund my own campaign. Right now I’m raising a lot of money for the GOP. I like doing it. But we have to have help.”

The specter of a Donald Trump campaign that is unfettered by the need for GOP funds must be terrifying the party elite. The GOP keeps hoping that Trump will fall in line once he needs the money for a general campaign, but he has shown that he is willing to spend more than $43 million of his own money and is now increasing his fundraising efforts.