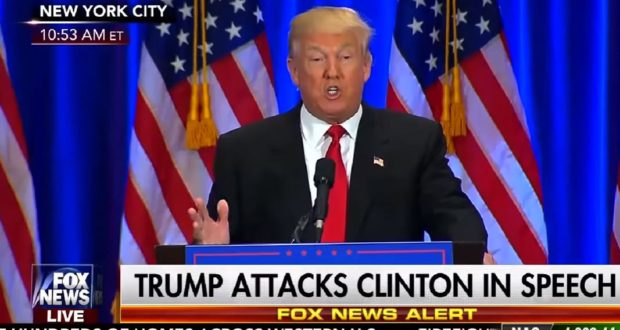 Welcome to Volume One of a suite of fact checking on Donald Trump’s “Clinton Speech.”

Donald Trump made an important speech yesterday morning, trying to recover from falling poll numbers and a series of missteps in his campaign over the last few weeks. In the 40 minute speech Trump eschewed his normal stream of consciousness style of oration for a more measured tone read from a teleprompter. He built this speech up as an attack on Hillary Clinton, and he delivered, devoting almost all of the speech to his opponent. Most of his attacks were at least based in reality, but let’s dig into a fact check of some of the falsehoods Trump peddled yesterday.

“Our country will be better off when we start making our own products again,” Trump stated while lamenting the state of global trade, “And bringing our once great manufacturing capabilities back to the shores.”

What has left however are manufacturing jobs. There are 7.5 million fewer manufacturing jobs in the US versus 1977, but it isn’t those “disastrous trade deals” that have gotten rid of the majority of those. It’s a two fold attack of mechanization and subsequent productivity increases. According to the report, “For every manufacturing job lost to trade, nearly 9 have been lost to machines.”

Trump laments the loss of American manufacturing without even bothering to take a pulse. Gains in technology and productivity have cut millions of jobs in the US, but allowed huge gains in individual worker productivity and, again, the highest rate of production in history.

US national unemployment is at 4.7% right now, so what happened to all of those workers? There is a silver lining to the global economy, says Michael Hicks, author of this report. “But trade also creates jobs. We have 7 million more transportation and logistics jobs alone, likely attributable to trade, since the 1970s.”