On Saturday Donald Trump tweeted a picture of Hillary Clinton featuring a six pointed star emblazoned with “Most Corrupt Candidate Ever!” on a bed of $100 bills. After it was pointed out to Trump that the star could be taken as a Star of David, and that corruption and avarice are common anti-Semitic tropes, the tweet was deleted and reposted, with the Star of David clumsily replaced with a large circle. The media proclaimed that this is a thinly veiled dog whistle to anti-Semitic Trump supporters. Racists would see the Star of David on a bed of money and get the implication, whereas the average non-awful person would just see a shape.

This morning Trump tweeted that the media is being too sensitive, and that maybe the star is just a sheriff’s star or a plain star:

Trump’s pleas of innocence would be more believable if the image had not originated in a right wing forum known for racist and anti-Semitic posts charmingly called /pol/ – Politically Incorrect. The thread that the image appeared in has been deleted, but don’t worry. You can see the original post using the internet time machine. It was posted June 22, a week before the Trump campaign got a hold of it. Of note is the name of the file hILLhISTORY.jpg. Notice that the letter ‘h’ is lower case where the rest is upper case. This is another well known dog whistle to white supremacists: the two ‘Hs’ stand for “Heil Hitler.”

This is a dark hole of the internet. These posts are not dog whistles, many of the posts are openly racist, Pro-Nazi, Pro-rape and anti-Hillary Clinton. Here is a sample of some of the other images available in the very same deleted thread where the Clinton image first appeared: 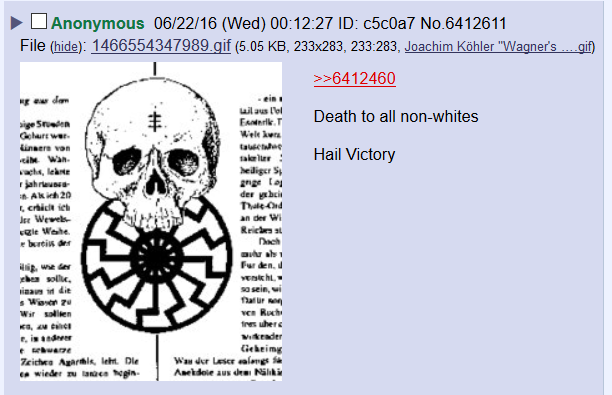