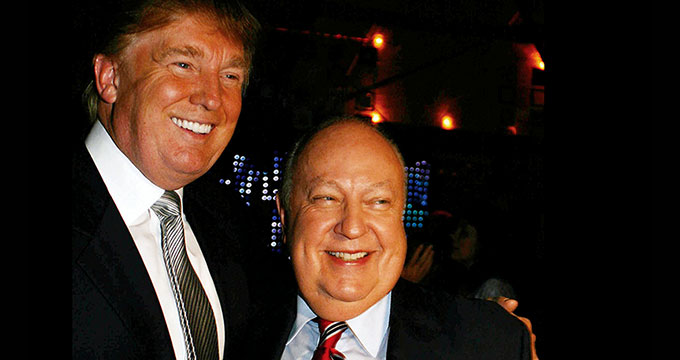 Fox News CEO Roger Ailes resigned last week in disgrace amid rampant accusations of sexual harassment over his tenure at the news organization. Gretchen Carlson and as many as 25 other Fox News employees past and present have come forward in the past few weeks to tell their stories of a long history of sexual harassment by Roger Ailes. While Ailes’ $40 million golden parachute should soften the blow of his leaving, many people would see this resignation as a sexual predator who used his office to abuse women being removed from that position of power.

Donald Trump is not one of those people.

“I can tell you that some of the women that are complaining, I know how much he’s helped them, and even recently. And when they write books that are fairly recently released, and they say wonderful things about him. And now all of a sudden they’re saying these horrible things about him. It’s very sad. Because he’s a very good person. I’ve always found him to be just a very, very good person. And by the way, a very, very talented person. Look what he’s done. So I feel very badly. But a lot of people are thinking he’s going to run my campaign.”

Trump said that on Meet The Press, and not only defends Ailes by calling him a “very, very good person,” but insinuates that there may be a place on Trump’s campaign team for the man that has been publicly accused of sexual harassment by more than two dozen women. Trump’s favorite Fox News punching bag/new BFF Megyn Kelly was conspicuously silent when many of her Fox News co-workers were coming out to support Ailes.

Trump continues to show his disdain for women, saying that they are “complaining” that they were denied promotion or fired because they would not have sex with Roger Ailes. Trump then calls into question the stories of the victims that have come out “all of a sudden,” implicitly implying that there is some ulterior motive in these claims. Trump’s statements imply that the victims are turning on a great man that has helped them, instead of seeing that these women are freed from the fear of retribution for coming forward.

Gretchen Carlson claims that Ailes pressured her for more than a decade, saying “you and I should have had a sexual relationship a long time ago, and then you’d be good and better and I’d be good and better.” Her lawsuit against him is being reviewed in court.