Donald Trump’s health declaration from his doctor, Dr. Harold Bornstein, has come under scrutiny this week. Bornstein revealed to NBC News last week that he wrote the letter in five minutes while Donald Trump’s limo waited downstairs. “I get anxious when I get rushed. So I try to get four or five lines down as fast as possible so that they would be happy,” he said of the letter which declared Trump’s test results as “astonishingly excellent.”

This letter is the sum total of medical information that Trump has released, a weird, dashed off letter that is long on Trumpian hyperbole and short on details. Trump’s blood pressure and PSA levels are the only specifics given in the letter that is filled with typos and outdated information. 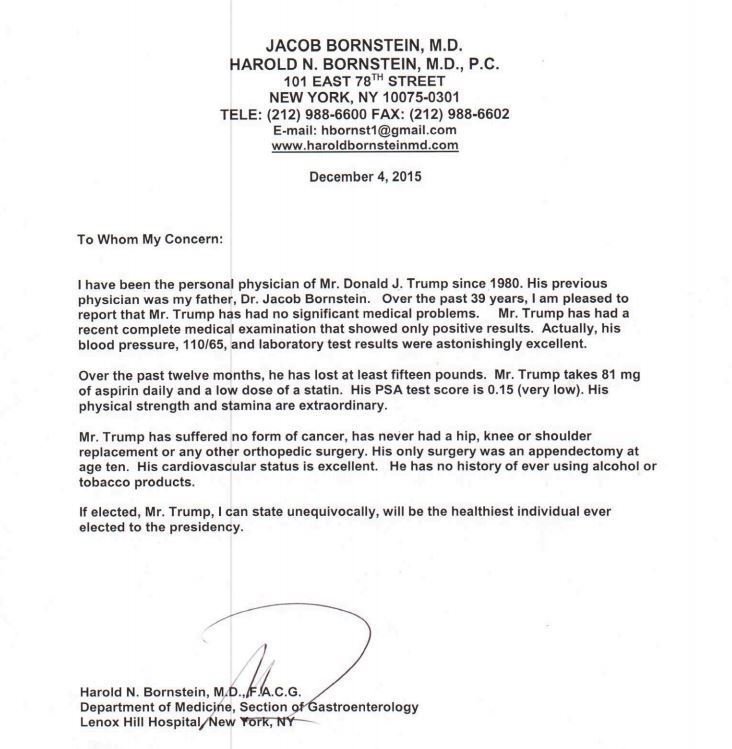 For starters, Jacob Bornstein died in 2010. Probably time to get new letterhead. The website mentioned in the letter does not exist, although some enterprising Hillary vote bought the domain and it now redirects to http://www.annoyingteddy.com. The salutation is a typo: “To Whom My Concern.” Why would this doctor be astonished by excellent results? Are all of his patients very sick? As to whether Trump would be the healthiest individual ever elected, I’d really like to compare his results to James Madison’s first, thank you.

There is no mention of Trump’s family history, history of injuries, heart rate, cholesterol or breathing rate. No specifics are released about his “astonishingly excellent” lab results other than his PSA score is 0.15.

Hillary Clinton, on the other hand, has released a detailed two page letter, with plenty of specifics and delves into family history, lab results, past injuries and illnesses as well as specifics about her diet, activity and lifestyle. It really is everything that the Trump letter is not. Clinton’s letter is detailed and serious in tone, and manages not to contain any hyperbole, typos or outdated websites.