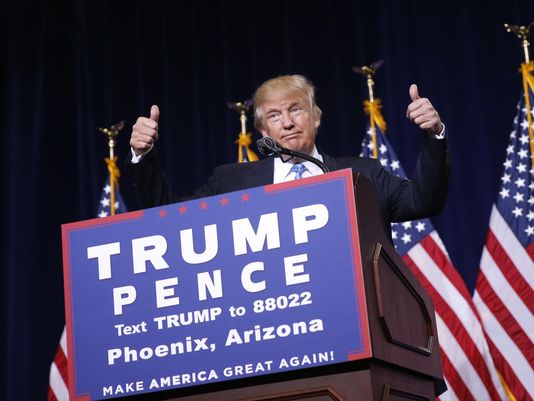 Donald Trump outlined some of his own policies in this momentous speech, but it wouldn’t be a Trump speech if he didn’t take some shots at his opponents by completely misrepresenting their platform. Trump made several claims about the future immigration policies of a President Clinton, let’s check out what the candidate herself has promised compared to Trump’s assertions.

“Hillary Clinton has pledged amnesty in her first 100 days, and her plan will provide Obamacare, Social Security, and Medicare for illegal immigrants, breaking the federal budget,” Trump said in Phoenix on Wednesday.

Her plan will not provide Obamacare for illegal immigrants. She has stated that if an immigrant can afford to buy insurance off of the exchange she supports that, but federal subsidies for illegal immigrants will not be available. “We should let families—regardless of immigration status—buy into the Affordable Care Act exchanges. Families who want to purchase health insurance should be able to do so,” Clinton said on her website.

Hillary Clinton’s plan would not allow illegal immigrants to collect Social Security or Medicaid. Clinton does support some worker programs that would force non-citizen immigrants to work and pay into the system, but would not be eligible to receive benefits unless they had paid in for many years. They would not in any way be eligible for Medicaid.

Since literally everything that Trump said in this statement about Clinton’s plan is false, it would unlikely be “breaking the federal budget.” Any more than the budget already is broken, I suppose.