Well that was fun. There are plenty of Trump lies to talk about from the debate last night, so WDTLAY will be doing several volumes looking at some of the newer falsehoods . It was a little surprising how many lies that have been covered on this blog previously were trotted out yesterday by Mr. Trump.

Actually, he did say that on Twitter in 2012 and didn’t bother to delete it.

While Trump has described this as some sort of joke, as recently as January 2016 on Fox and Friends he again made the connection between a global warming hoax and China.

Well, I think the climate change is just a very, very expensive form of tax. A lot of people are making a lot of money. I know much about climate change. I’d be — received environmental awards. And I often joke that this is done for the benefit of China. Obviously, I joke. But this is done for the benefit of China, because China does not do anything to help climate change. They burn everything you could burn; they couldn’t care less. They have very — you know, their standards are nothing. But they — in the meantime, they can undercut us on price. So it’s very hard on our business.

In case you were wondering whether or not Donald Trump understands how science works, here are a few bonus tweets from Trump alleging that “this climate change (global warming) bullshit” is a hoax. Enjoy, and we’ll see you tomorrow for Volume Two of or Debate fact check. 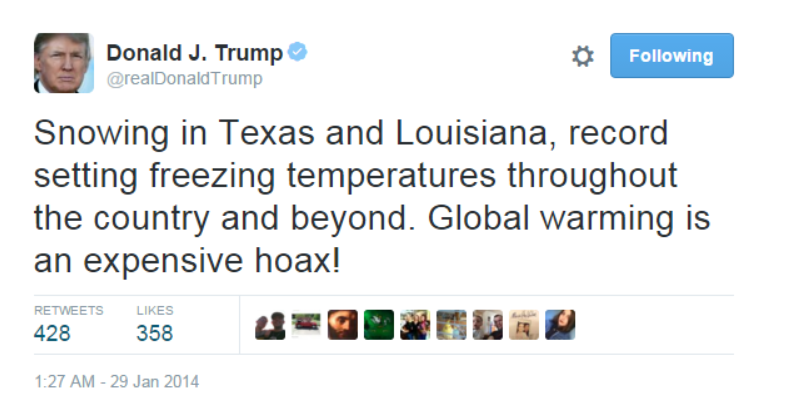