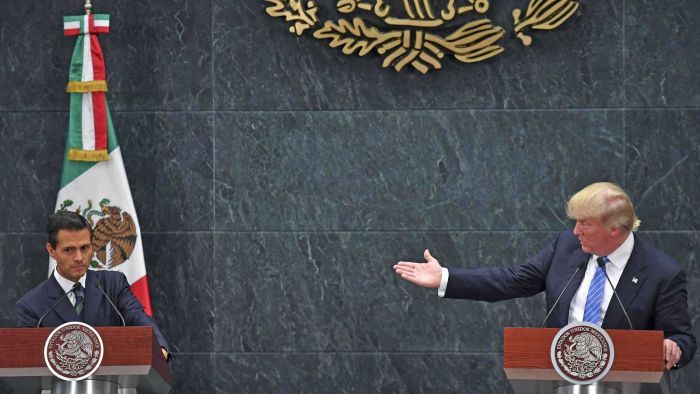 We’ll get to the meat of this speech starting tomorrow, but I would be remiss if the topic of Trump’s impromptu meeting with Mexico’s President Nieto was not discussed. Seemingly out of nowhere on Monday Trump decided to accept an offer of a meeting with Nieto scheduled for yesterday. This came just hours before one of the biggest speeches of the Trump campaign given last night, where Trump hoped to clarify his position on illegal immigration.

While the meeting was behind closed doors, Trump and Nieto immediately held a very lukewarm press conference afterward, where both men read prepared statements from cards. Trump told a reporter immediately after the press conference that he and President Nieto didn’t discuss who was going to pay for The Wall.

“Who pays for The Wall? We didn’t discuss,” Trump. “We did discuss The Wall. We didn’t discuss payment of The Wall. That’ll be for a later date.” Building The Wall and making Mexico pay for it has been a central tenet of Trump’s campaign since its inception.

President Nieto disagrees. He said after the meeting in a tweet that they definitely did talk about who was going to pay for The Wall, and it wasn’t going to be Mexico. “At the start of the conversation with Donald Trump, I made it clear that Mexico will not pay for the wall,” he said.

Trump spokesman Jason Miller said that the meeting “was not a negotiation” and that it would be “inappropriate” to discuss those matters now. He did not elaborate further on how that statement doesn’t make any sense. It was a negotiation and an official meeting seems like the perfect time to discuss a main issue of your candidate involving both parties. “It is unsurprising that they hold two different views on this issue, and we look forward to continuing the conversation,” Miller said, leaving me wondering how it is unsurprising that Trump can’t remember what they talked about in the meeting.

In any case, Trump was supposed to be building a bridge to build The Wall, and this disagreement points to the futility of Trump’s plan. Trump and Nieto can’t even agree on whether or not they merely discussed who is going to pay for The Wall, much less who is going to actually pay for it. Instead of beginning a friendship, Trump has made Nieto look like a fool and showed Mexico’s President that Trump is an inveterate liar who probably shouldn’t be trusted in the future.