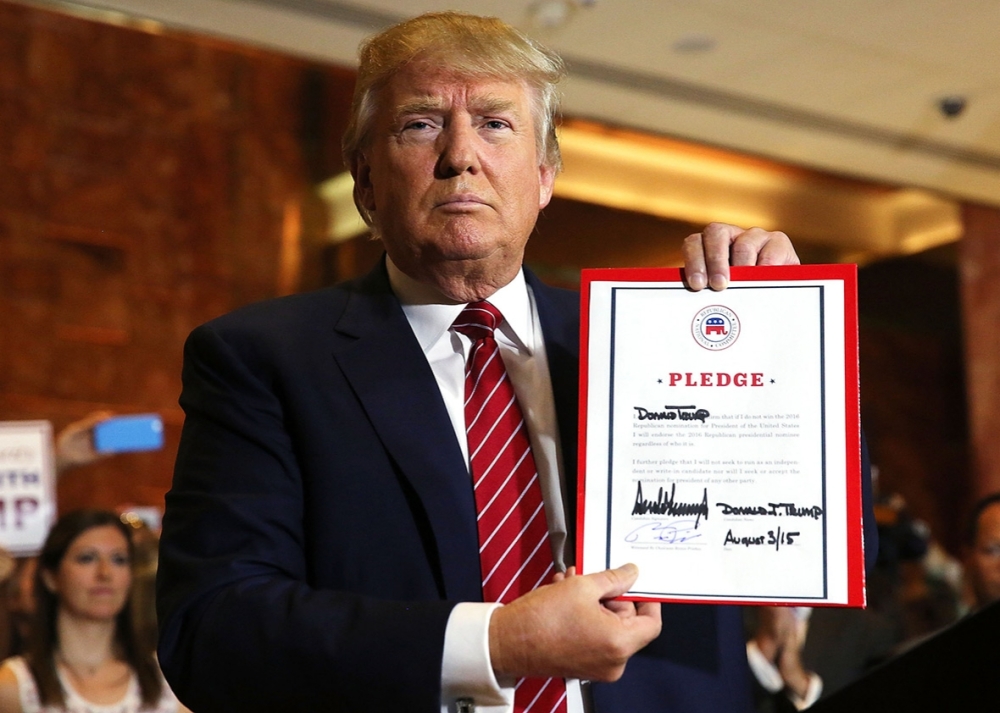 Donald Trump, now the presumptive GOP candidate after the Indiana primaries, has gone on the offensive against some GOP stalwarts for failing to come out with support after signing a pledge to do so. This pledge states that a candidate running for President in the Republican primaries will support the eventual nominee and promises not to run as a third party candidate.

South Carolina Senator Lindsey Graham and former governor Jeb Bush were the targets of Trump’s ire, as he has taken to twitter to call the two men dishonorable failures.

It got even a little more personal at a rally in Spokane, WA where Trump said “When we went to South Carolina, [Lindsey Graham] thought he had power. My 10-year-old son Barron had more power. A total dope constantly on TV knocking me.”

The problem is that Trump has said on multiple occasions that if he were not the nominee he would break the same pledge that he signed. WDTLAY covered it two months ago. Trump also threatened to sue Ted Cruz and the GOP for reneging on the pledge when the GOP refused to intervene in what Trump saw as attacks on his platform from Cruz. Or what most rational people would call a campaign.

In February, after Trump’s feelers were hurt when he was booed at a GOP debate, stated “I signed a pledge and as far as I’m concerned they’re in default of their pledge.” He went on later that month to say “I am not being treated properly. Whether I ran as an independent or not, those people will never go out and vote. If I go, these millions of people that joined, they’re coming with me.” In March Anderson Cooper asked him if he still promised “to pledge to support whoever the Republican nominee is?” Trump replied “No, I don’t anymore.”

Donald Trump is railing against the the very people that he was threatening a few months ago. Can they be blamed for hesitating on endorsing him? Why would they endorse a man that says they have “no honor” or are “a dope?” If they fail to endorse him they would be breaking the pledge, but the pledge does not specify a time frame to endorse to avoid breaking the pledge. Technically the other candidates could wait until the day of the election to endorse and still be within the letter, if not the spirit, of the pledge.

In addition, it is a little early for Trump to be threatening people for breaking this pledge. He is not yet “the 2016 Republican Presidential nominee.” A candidate with constituents mostly against Trump certainly could not be blamed for waiting until at least after the convention to endorse.